Eugene O'Neill's father James was a famous actor. He played Macduff opposite Edwin Booth in Macbeth, and was a renowned Romeo (onstage and off). But he was best known for his role in The Count of Monte Cristo, a part he played regularly over more than forty years. It wasn't long before his popularity in the role became a trap. The San Francisco News Letter complained that his performance had "degenerated" from art to mere commerce. O'Neill tried to turn to other works - notably Julius Caesar - but when those flopped financially he found himself back in The Count to recoup his lost money. Thanks in large part to his son's retelling of the story, O'Neill's dilemma has become a warning trope to actors who repeat a role: This way lies artistic peril.

theatre KAPOW just completed its fifth production (in four years) of The Burial at Thebes, Seamus Heaney's adaptation of Sophocles' Antigone. Each year we remount our production for Saint Anselm College, as part of the College's Conversatio course for first-year students. The production helps us pay the bills for the rest of the season. Four of our company have appeared in the same roles in all five productions. Yet with some effort on all our parts, we have avoided the artistic peril. 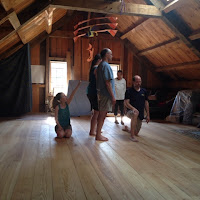 This summer during our annual retreat at Chanticleer Gardens we dedicated five class sessions in what we called the Michael Chekhov Practicum to rehearsing just the first scene of Antigone, each day from a different starting point in the actor's art: psycho-physical center, quality of movement, atmosphere of place, expansion and contraction, rising and falling. Apart from the pure joy of exploring a great story, we learned that the first scene alone remains full of new possibilities for us. We haven't come close to plumbing the depths of the Antigone story. 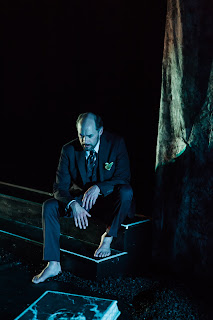 A month later we began formal rehearsals for this latest production. The design and staging elements remain largely the same. But the four actors who were returning for the fifth time each found a newness in the work. Each of us had the experience of hearing or seeing something in a new way, and thus each of us could realize new relationships and possibilities. For me that was the result of a new starting point. If last year was all about what Chekhov called psychological gesture, this year began with the atmosphere of corruption, and the corruption of flesh and morals that runs through the play. That atmosphere generates an odor, an imagined sensation on the skin, and a visceral experience of corruption. That experience of the atmosphere led me to an enhanced understanding of Creon's action through the play. He's not only "saving the city;" this year he's purging the corruption, and again that action carries him from the beginning of the play to the very end. The experience of atmosphere led also to a new quality of movement - less flying this year, and more molding. And then to a new experience of psychological gesture that develops from expanding and contracting in the atmosphere. Purging is a kind of expansion; the defense against or retreat from corruption is a kind of contraction. And those new or refined gestures led further, to a new consideration of archetype. This year, Creon is not so much a king as he is a priest (who else has the work of saving the people or purging the corruption?). Antigone, in my mind, becomes a priestess, or nun, or sacrificial virgin. And thus we arrive - in fairly rapid fashion - at a deeper layering of the relationship between the two characters. 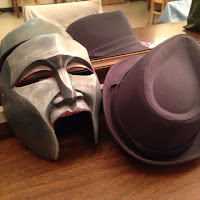 Of course we still encounter the usual troubles that plague almost every production in almost every company - too little time to rehearse, uncertainty about the receptivity of the young audience (which this year was superb), and so on. But the lesson of this year's remounting, and of all great plays, is that we never really "close" a production, or "put to bed" a great role. We've discovered that there's a lot of work left for us to explore in this story, and that as we continue to incorporate trainings with rehearsals we can avoid "the O'Neill Dilemma." Next year's Thebes won't be a mere repeating of the old chestnut for us, but the opportunity for our deepest artistic growth.

~Peter Josephson
Posted by theatre KAPOW at 9:49 AM 2 comments: