From Brazilian Page to American Stage

It is not rare for theatre KAPOW to work with pieces in translation.  In fact, a quick count reveals that nine of our mainstage shows over the past seven seasons have been English translations/adaptations of pieces originally penned in a different language.  So, I think we’ve become pretty adept at interpreting foreign text for American audiences.  What we have never done, however, is play an active role in translating and adapting a piece for the stage.  That’s exactly the challenge we find ourselves facing with our current project, Uma Vida Imaginária (An Imaginary Life). 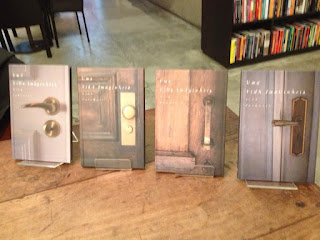 How the text ever got to us in the first place is quite an amazing story.  Just over a year ago, our dear friend and collaborator Valentina Lattuada introduced me to Nick Farewell, a novelist currently living and working Sao Paulo, Brazil.  Nick, whose birth name is Gye Suk Lee, was born in South Korea and emigrated to Brazil when he was 14.  Nick’s parents were determined that he would assimilate to his new culture so he started using the western name Nicholas.  He says he learned Portuguese by playing ball with his school friends.  After starting a degree in Mechanical Engineering, Nick changed paths and decided to go into advertising.  He is now one of Brazil’s most well-known authors.  His best-selling book Go was selected for inclusion in the Brazilian public school curriculum and is such a cultural phenomenon that it has led to young people throughout Brazil getting the book’s title tattooed on themselves.
It was another of Nick’s books (Uma Vida Imaginária), that Valentina told me renewed her own faith in the redeeming power of love.  When Nick agreed to allow us to adapt his book for the stage, Valentina and I jumped at the opportunity.   That process started in earnest in August 2014 when Valentina travelled to NH to lead some training as part of theatre KAPOW’s annual summer artists’ retreat.  Carey, Peter, Valentina and I worked with local Brazilian actor Rafael Marinho to start the arduous process of making Nick’s words performable.  This was some of the most rewarding work of my life in the theatre.  Listening to Valentina and Rafael work through the language and then working with them to help take the literal translation and make it sound more natural was invigorating. 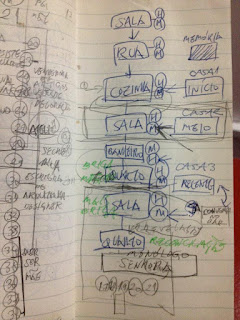 That week of work in August provided us with a rough draft of a script, but we knew that it still needed a lot of work.  Our next step was to send the script to our good friend and well-respected NH playwright Lowell Williams.  Lowell went through the script for us and found all the things that he thought needed to be re-worked.  One scene that provided us with a particularly difficult time (scene 10 in the show for those who may want to keep track) just didn’t seem to work in English.  In the scene the two characters are having trouble communicating because one is misinterpreting what the other is saying.  We really thought that the only way to make it work was if we kept the joke in Portuguese.  Then we decided to turn to two more of our longtime collaborators Mark Marshall and Kyp Pilalas from Wax Idiotical Films.  Mark and Kyp are two of the funniest guys I know and their films have a trademark quick wit.  They puzzled over the scene and within just a few days sent us a re-write that is absolutely one of my favorite parts of the show.  They just did such a tremendous job remaining loyal to Nick’s words while also finding a way to make the scene work for an American audience. 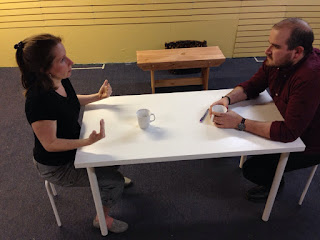 Now we’re in rehearsal for the show and every night we find little things we want to tweak.  It’s a process to be sure and one that likely isn’t going to be finished until the lights come up on opening night.  We are anxious to share that moment with you and especially excited that Nick will be there to share it with us.  From Korea to Brazil to New Hampshire I can’t imagine what it will be like for him to watch his words come to life on stage at the Opera House.  Man, now I’m psyching myself out.  There’s lots of work left to do before you and Nick arrive. Gotta go.

Posted by theatre KAPOW at 4:50 PM No comments: