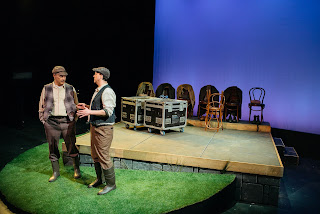 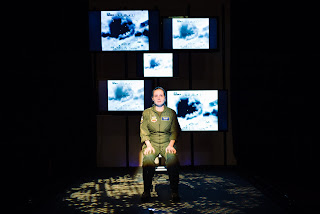 As we plan season nine (it’s still amazing to me that it’s already been eight years), we know that we have a responsibility to ourselves as artists, to the playwrights whose work we produce, and most of all to our audience, to continue to make deliberate choices when constructing the season. I’m excited to explore new themes in season nine and to see what conversations result.
~Matt Cahoon
Posted by theatre KAPOW at 7:07 PM No comments:

The Rock Star Power of a Book

A few weeks ago, I attended a meeting of the Arts Presenters of Northern New England, a consortium of approximately 40 arts organizations from NH, VT, and ME. The meeting was held at Middlebury College and there were almost 30 people in attendance (a larger than usual crowd for one of these meetings especially since many had a long drive). So, what was on the agenda that day that had the membership so excited? Well it happens that the meeting was scheduled at the same time that Shakespeare’s First Folio was on display at the museum on campus.
Following a bit of business during which many an arts presenter sat fidgeting in his or her seat awaiting an encounter with the Bard, we were ushered down to the museum. We met with the Chief Curator, Emmie Donadio, who spoke with us in the lobby for a few minutes about the museum’s mission and its collection. About 5 minutes into her remarks, however, she stopped and said, “but that’s not why you are all here.” We all knew that about 100 feet from where we stood, but just out of sight, sat one of the most important books we’d ever lay eyes on in person. Emmie released us like a group of school kids on the last day of school and we, distinguished professionals that we are, all practiced our best fast walk/almost run/you’re in a museum so be respectful. 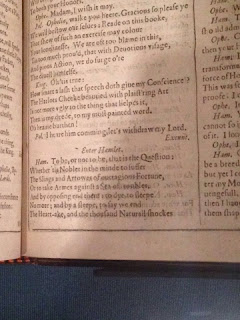 At the end of the main hall was a huge sign in the shape of an open book and to its right, sat the First Folio propped up on a pedestal and under glass. Like so many people observe when they see the Mona Lisa, the folio is smaller than the reputation that preceeds it so we, very gently but very eagerly, encircled the book in such a way that we could all get a look at it. The book sat open to Hamlet, Act 3 Scene 1 and there on the right page almost at the very bottom of the page and just an inch or so from the fold in the spine were printed the words “To be, or not to be, that is the Question.” Reading those words was a moment that quickened the pulse for sure. Emmie felt that, having relieved our craving to be in the presence of the book, it was safe to spend a few minutes speaking about it and about its importance not only as storehouse of some of the most important English literature, but also as an object that represents an important period in printing. Her expertise is in rare books and it was fascinating to see how excited she was about it as a book while many of us seemed more excited about the book’s contents. If you have never done so and ever get the opportunity, I strongly encourage you to take part in a curator lead tour of an exhibition. You’ll learn more about art than you ever thought you could know.
What I found most exciting about the day, however, was the enthusiasm that all of these arts presenters had for this book under glass. I’m a theatre guy so to me it represents so much of the past, present, and future of the field about which I am most passionate. To music people, this was the book that inspired Mendelssohn and Tchaikovsky. To fine art people this book provides context for appreciating Sargent’s Lady M and Millais’ Ophelia. Opera aficionados find in the book the muse of Verdi and Wagner. It’s a great unifier. Mostly, I was so thrilled to see how giddy this book made my colleagues.
So, by now, you’ve probably figured out why I share this story.  This morning, two days earlier than the scheduled open date; the exhibition First Folio: The Book the Gave us Shakespeare became available for public viewing at the Currier Museum of Art. theatre KAPOW is thrilled to have been a part of bringing the folio to NH and we are really looking forward to taking part in many of the events scheduled around its visit. Our involvement with this project dates back over a year now.  tKAPOW took part in the application process to bring the folio to NH and took a lead role in organizing programming to accompany the visit. Now, here we are and over the course of the next few weeks you will have the chance to not only see this amazing book in person, but also geek out with us in a month long celebration of the bard. 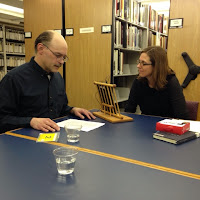 tKAPOW’s first public event in conjunction with the folio’s visit will take place Monday, April 11th at 7:30pm at the Derry Public Library. Carey has put together a special presentation entitled “Women and Love in Shakespeare.” This intimate evening will feature readings from several of Shakespeare’s most famous heroines. Carey will reprise two roles near and dear to her heart with passages from Beatrice and Lady Macbeth. It is perhaps a little known fact that Carey and I started dating while playing opposite each other in Much Ado About Nothing in college.  My Benedict was passable but her Beatrice totally stole the show. On April 21st at the Currier, tKAPOW will present staged readings of two scenes from Shakespeare’s plays-within-the play. First we’ll tackle the murder of Gonzago from Hamlet followed by Pyramus and Thisbe from Midsummer’s Night Dream. We look forward to taking over the Currier’s Winter Garden with this fun and high-spirited selection. On April 23rd, tKAPOW is taking part in a daylong conference of teacher workshops revolving around teaching Shakespeare in the classroom. And, pay close attention because when you go to the museum, you will hear the familiar voices of some tKAPOW regulars leading the audio tour of the exhibition.
It’s going to be a great month with Shakespeare themed events taking place throughout the state.  I hope that you’ll take part in as much of this celebration as you can. This book that has moved the hearts and minds of artists throughout history is now sitting here in our state and still working its magic on us.
~ Matt Cahoon

Posted by theatre KAPOW at 9:22 AM No comments: