In The Winter’s Tale Polixenes, King of Bohemia, muses on the relationship of art and nature:

“Nature is made better by no mean

But Nature makes that mean. So, over that art
Which you say adds to nature, is an art
That nature makes. . . .
The art itself is nature.”

For its tenth season, theatre KAPOW is developing an original piece of theatre rooted in the legends, archetypes and arts of the First Peoples.

Our artistic aim is to uncover the “art that nature makes,” and to get back to the essential or archetypal image, gesture, sound, and story. 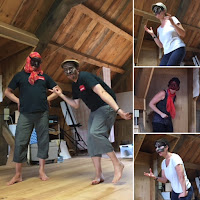 We began our work during KAPOW’s annual Artists’ Retreat at Chanticleer Gardens. That week we told stories and read poems of the Yupik, Inuit, Haida, and Tlingit, examined artifacts, and work-shopped approaches to devising (with Michael Chekhov practitioner Jason Lambert) and mask work (with award-winning actress and director Leslie Pasternack). The great lesson of that week is that this approach yields immediate results. The quality and depth of the images in these stories – their resonance – is immediately clear. By the end of the Retreat we knew that we already had more than enough material (so of course we sought more). 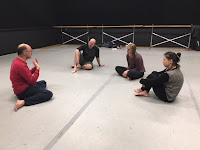 This winter we’ve returned to our exploration for six workshops. We expanded our library of stories, images, and characters (especially to add stories of Coyote the Trickster), and began to experiment with approaches to storytelling through the exploration of images. We’ve been experimenting with “moving images.” Beginning with a picture, we play with ways to put it into motion, and through that enactment we can discover the possibilities of meaning that will allow us to make choices in story-telling. We have now glimpsed how the moving image becomes an archetypal gesture or essential action. As we do that work, more images and ideas for staging come to us. We’ve found that this approach has helped us quickly shed preconceptions about storytelling and staging to open up some ancient and elemental possibilities. 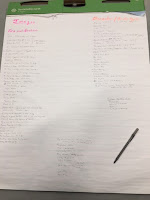 At the conclusion of our winter sessions we’ll have a collection of images and archetypal characters that will form the spine of the piece that we will begin to script through further workshops in March. In May we will begin the final phase of the devising – rehearsing in preparation for performance. the weekend of June 29th.

A Story That Cuts Like a Knife promises spirits, sacrifices, foolery, quests, and transformations and opens at the Derry Opera House on June 29th.
Posted by theatre KAPOW at 8:00 AM