Season 9 is here! It's actually hear, here. (See what we did there?)

It’s hard to believe, but tKAPOW is about to start work on our 9th season.  Since the very beginning we have prided ourselves on choosing scripts representative of the highest quality of dramatic literature.  As many of you may know, we generally program a piece by (or inspired by) a European playwright in the fall, a comedy in the winter, and a piece by an American playwright in the spring.  We also like to plan our seasons around unifying themes.  I’m really thrilled with what we have put together for season 9. 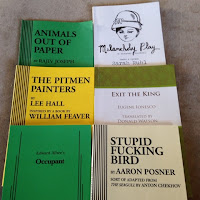 Here are some fun facts about season 9:


The season 9 theme is HEAR, HERE!  The shows in the season will all have a musical element (HEAR) and will all feature a meta-theatricality that sheds light on the shared experience of the artists and audiences when they are present together (HERE).  It’s going to be an amazing season with multiple NH premiere productions.

We’ll kick off season 9 (after a quick stop in Thebes and a reading at the Currier) in early October with Aaron Posner’s Stupid Fucking Bird.  Posner describes the piece as “sort of adapted from The Seagull.”  The show was written in 2013 and this will be its first production in NH.  It’s a very smart and funny script that roughly follows the same story as Chekhov’s classic play.  tKAPOW has produced plays by European masters including Strindberg and Ibsen and have always wanted to explore one of Chekhov’s full-length pieces (we did several of his one-acts in 2015).  It just turns out that in this case we’ll be looking at Chekhov through the words of one of America’s great contemporary dramatic voices.  As you can probably guess by the title this is something of an irreverent adaptation.  I promise that this will be a fun night of theatre as the lines between actor and audience are blurred and someone plays a ukelele!

In March, we’ll explore another piece that comes to us from a European master when we tackle Eugene Ionesco’s absurdist play Exit the King.  My father once told me that it was the funniest play he had ever seen. Okay, he told me more than once. In fact, basically every time that tKAPOW has done a comedy my father has told me that Exit the King is the funniest show he has ever seen.  So, you know it was only a matter of time before tKAPOW dove into this one.  The show is pure madcap fun as poor old King Berenger refuses to believe that his time on earth has come to an end.

And, yes, in April, after years of saying that we’d never do it, tKAPOW will be jazz squaring our way into the world of musical theatre. Kind of. For this show we’ll be returning to the work of Sarah Ruhl, a tKAPOW favorite whose Eurydice we produced way back in season 4.  I truly cannot express how much Sarah Ruhl’s work has inspired me.  Her grasp of the English language is amazing and while she is a very efficient writer she manages to develop moments of such profound depth.  So it is with her piece Melancholy Play: A Chamber Musical.  The reason that I say it is kind of a musical is that Ruhl originally published the piece as a play with a cello.  Approximately 10 years after its original production, she, along with composer Todd Almond, reenvisioned the piece as a musical complete with a string quartet and piano.  It’s beautiful.  Don’t let the name fool you, this is a very funny play.  We’re especially excited about this project because we will be collaborating with the NH Philharmonic.  We last worked with the NH Phil on their concert showcasing music inspired by the works of Shakespeare.  This collaboration will be more substantial and, we hope, will help both organizations reach new audiences.

As the summer all too quickly fades towards fall, I look at the work ahead with a great deal of eager anticipation.  In just a couple of days we will be holding auditions for Stupid Fucking Bird and Exit the King and that process is always an exciting one.  Soon after we cast the show we’ll be heading into rehearsal.  It’s amazing how quickly each season comes and goes.  I hope that you will continue to check back HERE to HEAR what we are up to.  Before we know it, we’ll be headed to season 10.