Pressure is a central ingredient:  pressure of collaboration, of time, of putting all this stuff together...I cannot possibly control it, therefore I start to work on a more intuitive level, rather than on a logical level, which is what you are trying to get to because all creation is intuitive.
-Anne Bogart

tKAPOW spent last week in residence at Charlestown Working Theatre developing our new piece Raining Aluminum.  This process was simultaneously thrilling, terrifying, inspiring and exhausting. While we have been doing pretty heavy research on the piece for about 15 months, we walked into CWT with little more than a collection of stories we’d like to explore and a few movement sequences. 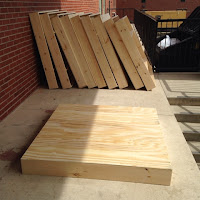 The day before we set out for Charlestown, Carey and I assembled ten brand new 4’ x 4’ platforms to act as the set (with the side benefit of being small enough to fit in the Opera House elevator for future shows) and loaded a truck full of various objects that we thought would help with the storytelling.   With Cynthia MacLeod, our musical collaborator, set to arrive that day, I spent Sunday loading in all of our odds and ends.  Just before I left CWT, I arranged the platforms and objects into what I proposed would be their starting position for the show.

Monday morning, we stopped at Cynthia’s hotel and Carey got to meet her for the first time (they became pretty close by the end of the week).  We drove down to Charlestown and discussed the plan for the day. 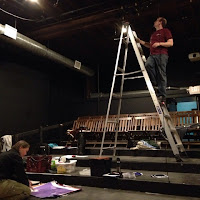 While Tayva and I worked on hanging a light plot (difficult to do when you don’t even have a script yet), Peter and Carey worked with Cynthia on learning a seated step dance that we planned to incorporate into the piece (it turns out that it was a remarkably effective way to start the show).  That evening we had our first rehearsal in space.  The daily schedule for the rest of the week was similar with intensive work during the day with our visiting artists on music, puppetry or text and then we’d rehearse in the evenings.  Now you probably understand the use of the word “exhausting” in the first line above. 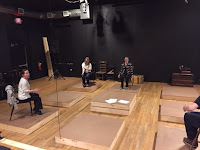 The week culminated in three work-in-progress showings.  On Thursday, Cynthia and the music was featured; on Friday, Vit Horejs and the object work was the focus; and, on Saturday, we were able to share a full first draft of the piece that included a lot of the text developed by our dramaturg Kelly Smith (including a monologue that was re-written about 10 minutes prior to the start of the showing).  An important part of the process was the audience feedback session that we conducted each night.  It was fascinating (and occasionally surprising) to hear which elements of the piece really resonated with the audience and equally as helpful to hear what wasn’t working.  This is all feedback that we will consider as we continue to develop the piece. 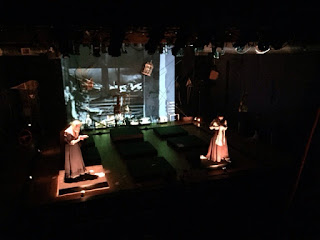 By far the best part of this opportunity was that it gave us a concentrated stretch of time to experiment, work, and play.  What Anne Bogart refers to as “exquisite pressure” was definitely a major contributing factor to our work last week.  Charles Mee describes Bogart’s “exquisite pressure” in the following way:


“[it’s] one which promotes creativity by overwhelming collaborators with a lot to do in a short amount of time so that they do not have the chance to think too much.” 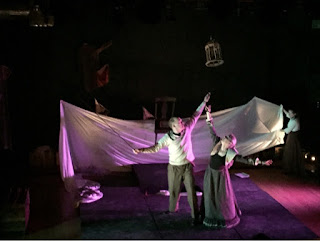 We often said last week that when creating original work you might work for an hour and only find 30 seconds of useable material.  Last week we certainly did create a bunch of stuff that ended up on the proverbial “cutting room floor,” but I think the pressure of having to have something ready to share with an audience resulted in the discovery of a few pearls.  In the coming weeks, we’ll work on stringing those pearls together to create a complete piece.  The new piece will premiere at the Stockbridge the weekend of July 8-10 and then we hope it will have the opportunity to tour around a bit.  If you are interested in seeing new and non-traditional theatre, I hope that you will come check it out.

Posted by theatre KAPOW at 6:43 PM