Technology and the Regression of Communication

It is well documented that the advancement of technology has ushered in a society that is more connected than it ever has been, yet (somehow) continues to regress in its ability to communicate truthfully. “Today” we are told “we have knowledge at our fingertips that we could only dream of in generations past.” It is true; in 2018 you are mere keystrokes away from the extended works of William Shakespeare, a live stream of Earth from the International Space Station, or an instructional YouTube video on how to best prepare salmon steaks. We can FaceTime, voice chat, text message, SnapChat (take your pick) with people on the other side of the planet with next to no effort.

Objectively, these tools provided through technological advancement should only further enable us to communicate with our fellow human beings. Bring us closer together, not isolate us. The barriers of distance, time and language (thank you Rosetta stone!) have been torn down by iPhones and touch-screens, and yet YouTube comments and Twitter are inundated with hateful, poorly-spelled, half-baked excuses for thoughtful discourse.

At what point do we stop blaming the tools and start holding ourselves accountable for our behavior? The reality is, barriers of language and trust are only brought down through vulnerability and honesty, behaviors that are not made easier through the newest gadget or social media. In fact, there is a very real case to be made that the interconnected modern society is actively detrimental to the idea of being truthful and vulnerable.

By connecting society through cell phones and computer screens, people are more exposed than ever. An errant tweet from years past is now grounds for firing, not to mention the vicious witch-hunt that comes, fully enabled through social media. “Burn in hell, sinner!” is so much easier to tweet than it is to verbalize; to speak to someone’s face. 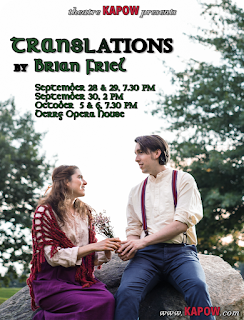 Brian Friel so perfectly illustrates in his play Translations how difficult it is to truthfully communicate with one another. We are so eager to throw up walls (be they technological, cultural or linguistic) to avoid the effort and discomfort that comes with a real human connection. “Say anything at all; I love the sound of your speech” says English Lieutenant Yolland to the local Irish woman Maire Catach. She is speaking Latin (completely unintelligible to the Lieutenant); desperately trying to communicate with him despite this seemingly unassailable barrier. And yet this young, earnest pair connect in a very real way, speaking in the universal tongues of smiles, laughs and sighs. No computers, no Google Translate, no cell phones. Just two people and the warm, Irish air of a summer night in 1833. Intent is everything, and this highlights the exasperatingly simple solution to this age-old problem:

Society, it seems, has come to the conclusion that technological advancement enables our problems to be solved for us. The average first-world citizen has been given a free pass to check-out; intellectually as well as socially. We, as a society must recognize that the advancement of technology must be accompanied by a commensurate advancement and evolution of our intellectual and civic responsibilities. The technological marvels at our disposal are not crutches. They’re ladders. Let’s start using them.
~Jimmy Stewart