What the hell is going on?

This was the over-riding thought I had when I finished reading Exit the King. Ionesco's writing, I knew, like Beckett, like Sartre, can be esoteric and difficult to decipher. "Avant-Garde." "Absurd." "Didactic." In other words: inaccessible. I would be lying if I said I did not agree with some of these labels, especially during my reading of the play. For every insightful notion, there was a confusing one. At one moment I would be inspired by the eloquence of his language, at another irritated by his apparent pretentiousness. This is most certainly a play meant to be seen, not read, I thought to myself. It needs to be on its feet! We need our read through!

What the hell is going on??


Boy was I wrong. Upon completing our cast read through, I not only was left feeling similar to how I felt after reading the play, but if anything, I had more questions! I had suspected Ionesco would be daunting, and yet here I was feeling like years of performing theatre had left me utterly and singularly unprepared to turn these words into something resembling a coherent performance. Luckily, it appeared to me that I was not on an island in my thinking. Here were artists I respect and admire, and we all seemed equally humbled by how truly massive this text is.

If you had asked me what I thought our rehearsals held in store, I likely would have responded: Frustration. Confusion. Doubt. Or perhaps some combination of the three.

What do I find dominate my memories of rehearsal thus far?

Tears of laughter. Barely concealed grins. Countless (failed) attempts to remain in character. These have been found in abundance through our rehearsal process. I believe this is due to a critical discovery made early in the process.

We discovered, that buried underneath a masterfully written political commentary, Ionesco has written a very funny play. This is our password. Our Rosetta stone. Because at the end of the day, Ionesco's wonderfully relevant text is useless if the audience does not connect with it. But because he was really, really smart; he wrote the key into the play.

Find the silly. Find it, and embrace it. 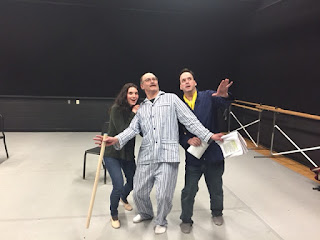 Laughter has the wonderful power to bring people from all walks of life together in a shared experience. This is intensely needed, in a time where people live in digital echoing chambers and spend their time dehumanizing "the other team." That is to say, anyone with different opinions.

That is what this play needs to do. It needs to invite the audience in. Reach out a hand, a genuine offer of inclusion. The production should invest and respect the audience as fellow human beings capable of rational thought.

This connection is made by showing them the silly, absurd things human beings do. But then show them the worst and best in all of us. 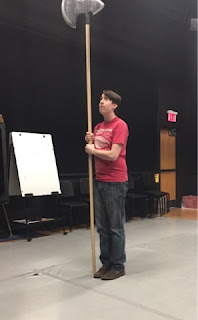 Inside every heart lives a lover, who puts their heart in the hands of another human being, risking shame, humiliation and pain for the chance at true happiness; who lets the one they love inspire them to be better, stronger, kinder. But inside every heart also lives a skeptic, who distrusts the world and lashes out with insecurity and fear. Fear of shame. Humiliation, Pain.

Inspiration. Fear. Heroism. Impotence. Happiness. Pain. In other words, being alive. This play shows what it is like to be alive. That we are all capable of greatness. That we need to strive for it. That we need to be better.

Posted by theatre KAPOW at 6:20 PM No comments: